Do you like the concept of Death Drop and Lucky Blocks? Then Lucky Block Spaces is the minigame for you!

If you need to know how the game works, watch the video here: 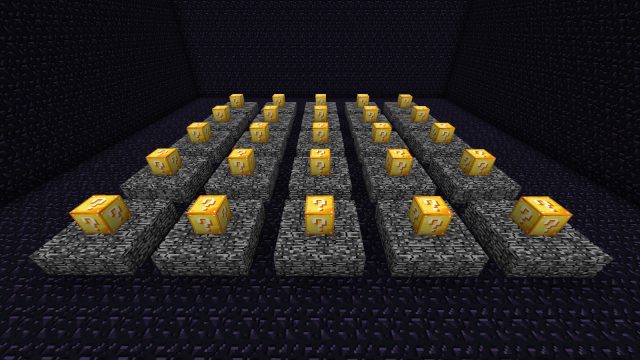 NOTE: This map requires Minecraft 1.8 ONLY; it will not work with any other versions. You’ll also need the latest version of Forge for Minecraft 1.8, as well as the Lucky Blocks Mod for 1.8 in order to play this map.

Do you feel lucky with Lucky Blocks? Do you like the concept of Death Drop? Well, we’ve decided to combine the two concepts to create a fun, modded Minecraft minigame for all: Lucky Block Spaces.

In this game, the player must aim for the target of their choice, then break the Lucky Block below them to find out what surprises hide inside! Score the least amount of deaths or the most valuable items and you’re a winner!

This minigame has three difficulties to choose from, and works in both singleplayer and up to 4 player multiplayer!

There are three difficulties to choose from (as of 1.0.1):

After choosing a difficulty, you’ll be teleported to the main area, consisting of chests for each of the 4 players. Each of the players’ chests are color-coded (in order): Red, Green, Blue, and Yellow.

To start the drop, click the green button labeled “Start Game”, and you’ll be teleported to the top of the playing field, where you’ll have to aim for the Lucky Block space of your choice.

Once you’re on top of your Lucky Block, break it. You only have about 5 seconds to break the block and collect the items from the Lucky Block. If you get an unlucky block, there’s a chance you’ll live or die!

After the 5 seconds are up, you’ll be teleported back to the main area. Repeat the same steps until all the Lucky Blocks in the playing field are gone.

If you wish to end the game, push the button labeled “End Game”, located opposite of the “Start Game” button.

If you want to play this map on a multiplayer server, you must do the following…

NOTE: Players who join your server might spawn outside of the main “choose difficulty” area. If that happens, use /tp @a [hosting player] in the server console.

If you followed the instructions correctly, you’ll be able to play Lucky Block Spaces with your friends! Enjoy!

This map was created and tested by Sage.
Special thanks goes to Nathan125 for Multiplayer testing.
Lucky Block mod made by PlayerInDistress.
Minecraft is owned by Mojang Studios.

NOTICE BEFORE DOWNLOADING: By downloading this map, you agree that you will not redistribute the files on any other website. This map is distributed for free; any commercial redistribution is strictly prohibited.